Nash/Bolich Building Will be Sold at Auction 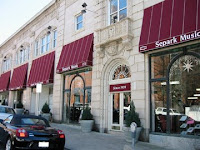 The 1928 Beaux-Art commercial building will be sold at public auction this spring. The sale is court-ordered to settle the estate of owner Mary Smithdeal, who passed away in 2007.

The Nash Building (pictured above) — also known as the “Bolich Building” — is located at 626 West Fourth Street, a route that introduces downtown Winston-Salem’s vibrant Fourth Street District with long-time tenants such as Separk Music and newer additions such as Skippy’s and Subway. Its prime location beside Foothills Brewery is directly across the street from the Winston-Salem Chamber of Commerce.

The Nash/Bolich Building has been in the Smithdeal family since the late 1920s when it was purchased from J.A. (Lou) Bolich, Jr., by John F. Smithdeal. As a Winston-Salem business and civic leader, Smithdeal founded Smithdeal Realty and Insurance Company, was president of John’s Realty Company, operated Planters and George-Davis tobacco warehouses, acted as director of First National Bank of Winston-Salem and served as a member of the N.C. State Legislature.

A press release and contact information will be sent out very soon. For more information, contact leighannwoodruff@triad.rr.com
Posted by Jason Thiel - Downtown Winston-Salem Blog at 10:31 AM