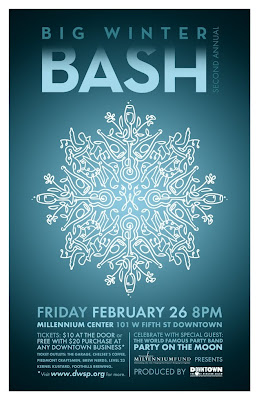 The 2nd Annual Big Winter Bash, presented by The Winston-Salem Millennium Fund, will be Friday, February 26, 2010.

The event will begin at 8 p.m. at the Millennium Center at Trade and Fifth Streets. The Big Winter Bash will feature Party On The Moon, a nationally known ten-piece band.

Advanced admission tickets for the event may be purchased for $10 beginning February 1st. In addition, the Downtown Partnership is offering a "free ticket" promotion. Persons interested in attending The Big Winter Bash have the option to purchase a minimum of $20.00 at any downtown establishment listed in the Downtown Shopping and Dining Guide during the month of February. They can then present their receipts at select ticket outlets (The Garage, Chelsee’s Coffee, Piedmont Craftsmen, Brew Nerds, Kernel Kustard, Level 23 and Foothills Brewing), and they will receive a free ticket (with a maximum of five free tickets per person).

For more information, click here.
The event is produced by the Downtown Winston-Salem Partnership.
Posted by Mary Charlotte at 1:48 PM