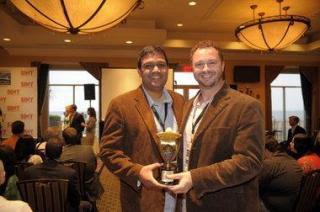 The sixth annual Staten Island Film Festival held its closing award ceremonies at The Vanderbilt, where about 600 guests and filmmakers were treated to fine fare, music and a fireworks display on the beach.

And while it may not be Tribeca, everyone agreed the festival continues to be a success.

"One of our objectives is to improve the image of Staten Island," said Cesar Claro, president and CEO of the Staten Island Economic Development Corporation, which organized the festival. "And I think we proved over six years that it's working."

The big winner was Lovinder Singh Gill, whose film "Stalemate" won for Best Picture. In it, the main character Kayleigh has finally found the perfect man but unfortunately, he comes in the form of two men she is dating, Richard and Arthur. Both are wonderful in different ways and are complementary pieces to the same puzzle: Kayleigh's heart.

Stalemate was filmed and produced in downtown Winston-Salem last year.
Posted by Mary Charlotte at 11:43 AM