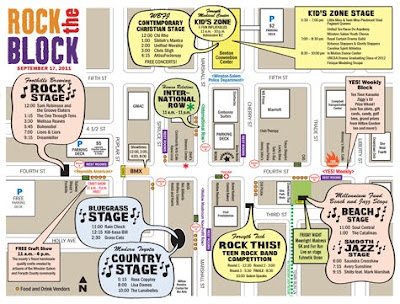 Rock the Block, downtown Winston-Salem’s annual street party is Friday and Saturday, September 16 and 17. Attached is information pertinent to residents and businesses in the footprint.

The Moonlight Madness 5k event, which serves as a the Rock the Block pre-party, will be based in Civic Plaza in front of One Park Vista. Runners will begin the race in front of the post office on Town Run Lane and will finish at the intersection of Third Street and One Park Vista Lane. Third, Second , and First Streets, Town Run Lane, Brookstown Avenue, Academy Street, Walnut Street, and Salem Avenue will be closed only during the time that runners are approaching and crossing the intersections. The first run of the evening begins at 7:30 and ends at approximately 7:50. The 5k run begins at 8:05pm and ends at 9:05pm.

All other activities on Friday night will be confined to Civic Plaza.
Saturday, Rock the Block occupies Fourth Street from Foothills Brewing to Liberty Street, Spruce Street to Second Street, Marshall Street from Second Street to Fifth Street, Fifth Street from Marshall to Cherry Street, and Cherry Street from Fourth to Third Street. Currently, there are notices on the On-street parking signs inside the area that say no parking will be allowed after 5pm. They should say 9pm. However, we will not tow vehicles left in the space unless they are there at 6am, Saturday17. Owners will be able to call City Link at 727-8000 to locate the vehicle.