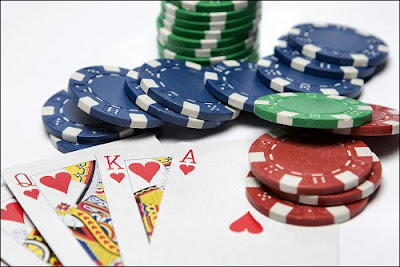 Who needs the World Series of Poker or the World Poker Tour?
*** Tournament Poker comes to Winston‐Salem for charity ***
The Tommy Lambeth Charitable Foundation announces its
4th Annual Texas Hold‘Em Poker Tournament, with proceeds benefiting the
Salvation Army’s Boys & Girls
Club.
The tournament will be held on Sunday, February 26th 2012 at 1pm
in the Hickory Room at Bib’s BBQ, 675 W. 5th Street, Winston‐Salem.

Prizes will be awarded for the top‐3 finishers. The $60 entry fee includes lunch catered by Bib’s. Registration begins at 12:30, and lunch will be served at 1. The tournament begins at 2.
Winston‐Salem native Tommy Lambeth passed on at the age of 36 in 2005, and played basketball collegiately at Lees‐McRae College. The Tommy Lambeth Charitable Foundation, Inc. was established in his memory to serve youth. In keeping with one of Tommy’s loves, the charity started and funds The Tommy Lambeth Summer Basketball League at the Salvation Army’s Boys & Girls Club.

To RSVP and secure your spot, please email Geoff Thompson at gt@gillder.com
Posted by Jacqueline Gardiner-Veal at 1:28 PM