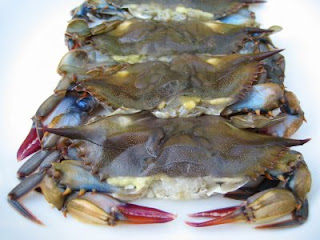 
The season for soft shell crabs – one of the great delicacies and mysteries of the culinary world –is upon us.  King’s Crab Shack in downtown Winston-Salem will celebrate with a Soft Shell Crab Fest this Sunday.
Soft shell crabs straight from the North Carolina Coast


“Fresh soft shell crabs are a delicious seasonal treat and diners always look forward to their arrival,” said Will Kingery, co-owner of King’s Crab Shack. “They also are one of the biggest mysteries of the culinary world.  So we decided to bring folks from the NC Coast who catch and shed soft shells and let our Winston-Salem diners visit with them and get answers straight from the horse’s mouth.


Everybody is invited.  Soft shell crab sandwiches will be the featured entrée but other menu items will be available.
“Soft shells are puzzlement to most folks, even those who love them the most,” said James Douglas, general manager at King’s. “Customers are always asking questions. We’ll have the answers at Crab Fest this Sunday.”


King’s Crab Shack and Oyster Bar opened last fall as the sister restaurant to Willow’s, also in Winston-Salem, which offers a diverse menu with daily specials of fresh fish and other seafood as available.  Both are owned by Chef Will Kingery and Norb Cooper.

And we'll have the small band, but here's us opening for Unknown Hinson at Ziggy's last weekend.

nice posting.. thanks for sharing.