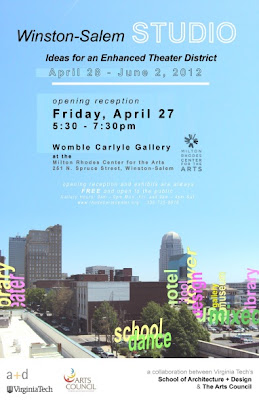 The success of downtown Winston-Salem’s emerging rebirth, as evidenced through the restaurants along Fourth Street, has led to an intensified interest in adding entertainment-based venues in adjacent areas. A well-functioning theater district is an incredible draw to downtown that in turn strengthens the city’s identity and value.

This year, a graduate student design studio from Virginia Tech’s School of Architecture & Design has taken on the challenge of enhancing downtown Winston-Salem’s Theater District. Given site and program options, the graduate students have spent their spring semester developing proposals for both individual buildings and master plan concepts.