I want to thank all of you who were able to attend the DWSP Annual Meeting today.  We had the opportunity to provide an update on Merschel Plaza.  We shared the video below as an update.

Also can be viewed on You Tube at https://www.youtube.com/watch?v=npIhHlrNBYs 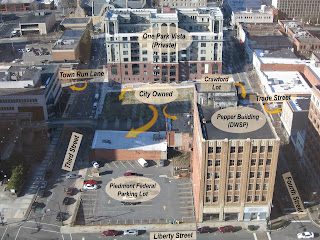 Meschel Plaza excerpt from the approved 2013 Downtown Plan............"
The Civic Plaza (now named Merschel Plaza) area will become the exciting
urban gathering place and mixed-use development
that will encompass parts of several
blocks in the heart of the Downtown. It will
become our Downtown’s “living room” and
will eventually connect the major office areas,
south of W. Second Street and east of N. Liberty
Street, with the retail and entertainment areas
to the north. The plaza itself will be a well landscaped
public park where people can
meet, relax, exercise and enjoy the amenities
of a wonderful urban space"