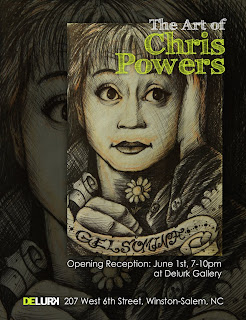 The Delurk Gallery will have an opening June 1, 2012 from 7pm-10pm for Featured Artist Chris Powers who will be presenting a retrospective of his works including drawings and paintings.
Chris Powers is an eclectic and compulsive artist who derives his work from a diverse inner and outer world of junk culture and international travel. Along with Chris's show, there will be a group show "Let Every Evil Lung Fill" juried by Chris Powers and Delurk members featuring a collection of artwork from artists around the country based on dialogue from the show The Simpsons.
There will be a performance art installation by co-op member Shanthony Exum entitled Coupon Queen.
Delurk Gallery is located at 207 West Sixth Street, Winston-Salem
These shows will run through June 26, 2012

Posted by Jacqueline Gardiner-Veal at 4:02 PM